I‘m a wee bit tardy on updating all of this but its been hard to get inspired to write when I have so much more time on my hands. Imagine that lol. Needless to say Lunar New Year was an awesome experience. Jodi and I actually sort of celebrated it the Sunday before when we went to visit Miwha’s family for the first time. Korean New Year, commonly known as Seollal (설날) and is celebrated for three days. Like Thanksgiving, their New Years is a traditional family holiday. I was glad to be included in part of the cultural aspects of it and just be able to hang out with a family for a night.

When visiting a home for the first time. If it’s a housewarming party then traditionally you can get them either detergent or toilet paper or paper towels. Aside from the practicality of these gifts (it was great receiving them from my co-teachers when they came to visit me) there is a more symbolic take. Detergent symbolize a physically and spiritually pure home, it bubbles up when mixed with water. The bubbles represent money and prosperity. The laundry detergent is a wish for the new homeowners to have a clean and prosperous place to live. As for toilet paper, it also symbolizes the wish for a clean and pure home. 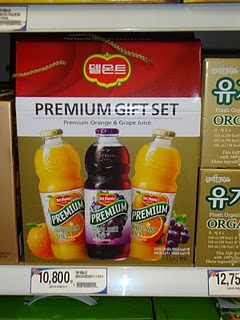 Since Jodi and I were not going for a housewarming party, we bought a juice gift set instead. Either that or bringing maybe fruit or even a cake for dessert would have been ok. Supermarkets were filling up with gift sets as the New Year celebration was approaching. Here are some of the generic things you will find when shopping for gift sets:

I love the practicality of these gifts. Who needs more shower gels and lotion bottles gifts sets from Bath and Body works when you can just get the stuff you actually need?

From what I heard Spam became very popular when our own soldiers came to stay here during the Korean war. Funny how it’s not so popular in America anymore but they love it here.

Cans of tuna are another popular gift choice. So convenient, I love it.

Sebae is the traditional bow performed by the children as a sign of respect to their elders. It is usually one deep long bow, any more and its usually associated with bowing to the dead. They then wish the elders a Happy New Year, “Saehae bok manhi padeuseyo” ( 새해 복 많이 받으세요) which translates to please receive many blessings in the new year. You can hear me say it on my clip from these year’s solar new year celebration here.

If you want to see more of that this looks like you can visit the tourist website for Korea where they’ve broken it down by gender. Here ya go.

Mihwa and her cousins taught us this awesome traditional game usually played on New Years. I can’t even begin to explain how to play ha, it was a bit complicated at first but it gets addictive and very VERY competitive. 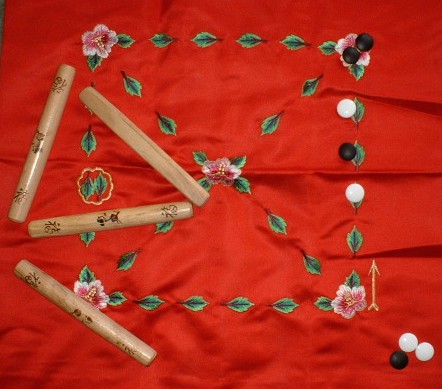 You have four sticks that are thrown, instead of using dice, and it determines how many spaces and in which direction you go to get your pieces back to the beginning. It’s all luck which makes it fun to play and watch since you don’t know what’s going to happen next. Here’s a video of a class playing a life size version of the game in the traditional Korean outfits called Hanbok (한복).

Yum! This was a great surprise to have. This soup is the traditional meal to have during this holiday. The dish consists of the soup, guk, with thinly sliced rice cakes ,tteok, similar to a rice pasta.

It is tradition to eat tteokguk on New Year’s day because it is believed to grant the person luck for the new year and gain an additional year of life. This is traditionally when all Koreans become a year older (NOT on their birthday). The soup is usually garnished with thin julienned sliced cooked eggs, marinated meat, and dried seaweed.

I‘m so glad I got to experience a bit of the Korean culture during this year’s Lunar New Year. If you ever have the chance, try the soup….its one of those that just makes you feel at home during a cold day.