This beautiful October Monday, I am off from school because it is a National holiday here. It is National Foundation Day (개천절 Gaecheonjeol). Or as was explained to me, it is Korea’s birthday, the creation of the Korean nation. There is a famous myth associated with it. It goes as follows:

In the legend, Hwanin (환인 “The Lord of Heaven”), had a son named Hwanung (환웅), who wished to live on earth. Every day, Hwanung would peer over the edge of heaven down into the earth in sadness. When questioned by his father, Hwanung answered that he worried for the fate of the mortals and that he wished to rule them in order to bring peace and justice into their kind. Moved by his son’s devotion, Hwanin allowed him to descend into the world and rule. He gave his son Three Heavenly Heirlooms, along with a group of three thousand servants, and ordered the Three Lords of Wind (풍백 Pungbaek), Rain (우사 Usa), and Clouds (운사 Unsa) to follow him.

He descended to earth with the 3,000 followers to Mount Taebaek (태백산), under a sandalwood tree in modern-day North Korea and set up a kingdom there. He established a city he called Shinshi 신시 (神市), meaning City of the Gods. Hwanung took care of 360 human affairs, including agriculture, life, illness, justice, good and evil, etc. It was during this time that two beasts approached him, wishing to become human. 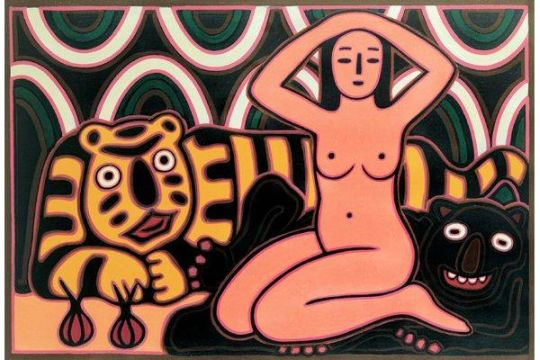 Hwanung gave them 20 cloves of garlic and a handful of mugwort and told them to abstain from any other food and stay out of the sun for 100 days.  The tiger and bear retired to a cave, but the tiger in its temper, grew impatient and left before the ordeal was through. The bear stayed and remained patient and on the twenty-first day turned into a beautiful woman. The woman was given the name Ungnyeo (웅녀).

The bear-woman (Ungnyeo 웅녀) was grateful and made offerings to Hwanung. Not long after her transformation, Ungnyeo began to crave a child, but since she had been a beast before she became a woman, no one was willing to wed her. and soon became sad and prayed beneath a “Sindansu” (신단수  “Divine Betula”) tree to be blessed with a child. Hwanung, moved by her prayers, took her for his wife and soon she gave birth to a son, who was named Dangun Wanggeom (단군왕검), meaning “Altar Prince” or sandalwood. 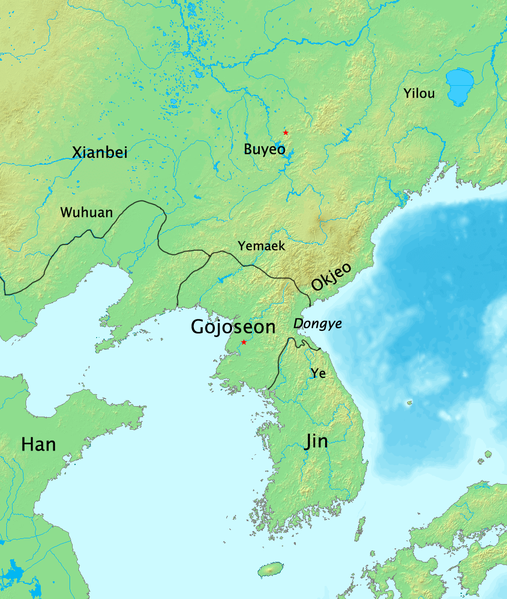 In 2333 BC, Dangun, forefather of the Korean people, established a kingdom he called Asadal (아사달), meaning “place where the morning sun shines”. It was the first Korean kingdom, around present-day Liaoning, Manchuria, and the Korean Peninsula. This name was later changed to Joseon (조선). It is now called Ancient Joseon or Gojoseon(고조선 “Go” which means Ancient, to distinguish it from the later Joseon kingdom).

Legend has it that Dangun ruled undisturbed for one thousand five hundred years. He is said to have lived until he was 1,908 years of age, at which point he decided to leave the mortal lands and headed for the quiet of the mountains where he became a divine spirit of the mountain, or Sansillyeong (산신령).

In the 1990s, North Korea claimed it had found and excavated parts of the Mausoleum of Dangun in Kangdong near Pyongyang. North Korea also claimed they found evidence proving Kim Il sung was a descendant of Tangun, indicating that Tangun is indeed a historical figure rather than just a mythological figure. They claimed that, “Tan’gun is now a historical figure who founded the first Korean state about 3000 B.C.E. which centered around Pyŏngyan” and eventually claiming it that the river Taedong was the birthplace of civilization. To further read about Tangun and the influence on North and South Korean history, read this.
As a visitor’s website claims, “Thanks to the correct policy of the Workers’ Party of Korea for preserving our nation’s cultural relics, Tangun, who was thought for thousands of years to have been a mythical being, was proved to have been a real person, and his tomb perfectly reconstructed in less than a year.”