In the spirit of Halloween, I asked a teacher if Korea had any scary stories. “Kumiho, the Fox with the Nine-Tails”, he said. Of course my interest was peaked and so he said, “Kumiho is a nine-tailed fox who eats the hearts of humans in order to survive. She digs up graves sometimes to find hearts or attacks men.”

A kitsune, the Japanese counterpart

He couldn’t tell me much more so I dug up some info. Unfortunately it all seems like the information is taken from a commentary on a book that holds the oral stories of Korea, Compendium of Korean Oral Literature (한국 구비문학 대계). This is more or less taken from Wiki and all other sources that say the same basic information:

A fox that lives a thousand years turns into a Kumiho (구미호), like its Japanese and Chinese counterparts (the kitsune and the huli jing). The current Japanese kitsune can sometimes be evil and sometimes good, but the Korean counterpart over the years has become a symbol of evil. Legends tell that while the Kumiho is capable transforming its appearance, there is still something persistently fox-like about it. In Transformation of the Kimono (구미호의 변신), a Kumiho transforms into an identical likeness of a bride at a wedding. Not even the bride’s mother can tell the difference. The Kumiho is only discovered when her clothes are removed. As the mythology of the Kumiho evolved it was later believed that a Kumiho had to consume human hearts in order to survive. Another version of the mythology, however, holds that with enough will a Kumiho could further ascend from its Yokwe state and become fully, permanently human and lose its evil character. 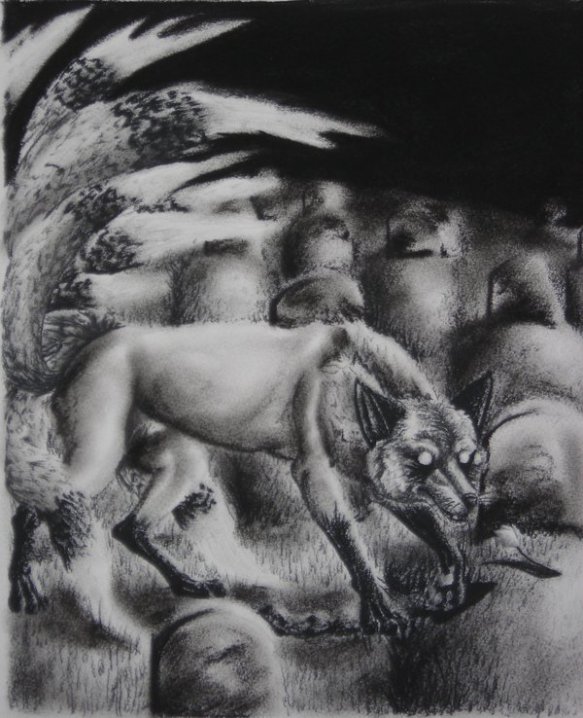 Though this is one of the few stories I’ve heard, scary stories in Korea tend to portray women as the evil ones in the tales. They tend to perhaps further reveal the old traditions and ways of thinking that reveal a fear of dangerous women. Bloody Mary, Lilith etc., our own literature is filled with these sorts of stories. Here is another Korean fox story, this story was translated by Heinz Insu Fenkl:

The Bone that was a Fox

One day a man relieved himself on a bone that was lying on the path. “Is it warm?” he said. “It’s warm,” the bone replied. “Is it cold?” “It’s cold,” said the bone. The frightened man ran away, hardly able to pull his pants up, and the bone chased him. Finally, he came to an ale house and he escaped out of the back. Years later the same man stopped at an ale house to drink, and he was served by a ravishingly beautiful woman. “My,” he said to her, “you look familiar for some reason.” “I should,” she replied. “Because I’m the bone you made water on all those years ago and I’ve been waiting for you!” And suddenly she changed into her true form, which was a fox, and she ate him up.

You can read more about his translated stories: Fox Wives & Other Dangerous Women and The Tale of the Fox’s Den

6 thoughts on “Kumiho: The Nine-Tailed Fox”