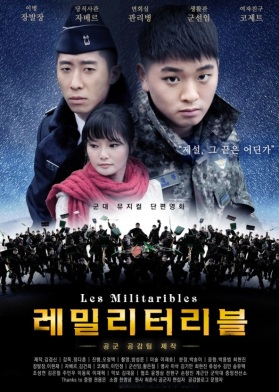 This is a bit overdue. but I had to share because I was humming along to Les Mis today and remembered the video. Les Miserables was pretty big hit here in Korea, as it was in the rest of the world. People were buzzing about Ann Hathaway and how undeniably amazing she was. Daegu had the show actually playing at the Keimyung theater, with a Korean cast singing in Korean.

Then this video comes along.

The opera-style video “Les Militarables” — made by 80 South Korean airmen with a budget of $900 — has garnered almost 4 million views since it was posted to YouTube on Feb. 5 [source].  The viral video’s hit is partly due to the boost it received by a tweet from Russell Crowe. It was a joint project between the Musical Video project of ROKAF (Republic of Korea Airf Force) Media Contents Team and the Air Force Military Band.

In the role of Valjean is a Korean airman, “Airman 24601,” with an overbearing superior named Javert. When his girlfriend, Cosette, comes to visit him at his base, Javert gives them only one hour of alone time. What made me laugh about this was the opening scene and seeing the snow. The original “Look Down” becomes “Dig Down” as the conscripts chant: “Dig down, dig down, and clear the snow below… There is no end to this accursed snow.”You would have to live in Korea and/or have Korean friends to fully understand. My Korean male friends have told me just how much they hate snow, simply because when they do their mandatory 2 years of service, they are often left with the job of shoveling snow. 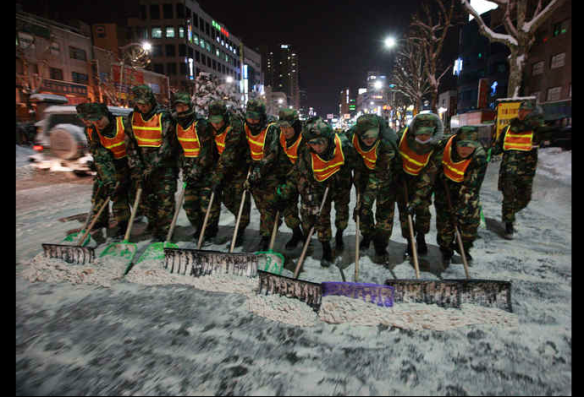 “We made the video to lift the spirit of servicemen who had to work so hard to clear snow during the unusually heavy winter this year,” Major Cheon Myeong-nyeong told the South China Morning Post. [source]

First Lieut. Chung Da-hoon, who directed the video and was a film student before being called up for service, said inspiration for the parody came when he and a fellow conscript began singing a song from Les Mis after seeing the movie, and thought of connecting the daunting task of snow removal and the musical in a video, the Huffington Post reported. Chung said the planning, writing, singing lessons and rehearsal took a month. The actual filming was done in three days, the Wall Street Journal reported. [source]