We had a FANTASTIC time running in the 22nd Gyeongju Cherry Blossom Marathon 제22회 경주 벚꽃 마라톤. Sadly, the cherry blossom trees were already losing their flowers, and not really in a romantic kind of way. More in the  this-is-kinda-depressing-to-watch-spring-go kind of way. But it was a beaaaauitful day, the sun was out and about, the wind decided to take a rest for the day and it was just perfect. I must admit, waking up at 5 am to go run 10 kilometers wasn’t my idea of a Saturday morning. But, once we got there and I took the much needed nap in the car (I am such a jerk passenger!), I was ready to go!

I attended the Daegu Marathon last year, but this marathon was by far waaaaay better. Here’s why:

They wanted to make sure they stood out, in case people didn’t realize they were foreigners.

Marathons in Korea are fun. One, they simply call them marathons, regardless of what you are running. So I feel so awesome when over lunch or coffee I offhandedly let out a “Oh yea, in a few weeks I’m doing a marathon”. No biggie…hehehe. Or rather simply, I just lack the Korean language skills to easily explain what I’m doing ;). Anyways, I love the fact that my money goes to full use. One, I get an awesome sporty t-shirt as a souvenir. And it’s not one of those lame 100% cotton shirts, but it is a legit sports running shirt that could actually be put to use. Second, I get a medal! Every participant gets a medal, and I don’t know about you, but I freakin’ deserve a medal after running 10 Kilometers. That pseudo-gold circular disk on a blue string means something!

Next, my money gets put to use through the means of unlimited food and drinks. I assume it’s unlimited, I have never tried to gorge myself on the soups and boiled eggs they serve, or on the beer and rice wine they are pouring for you after the race. Gatorade is for the weak apparently. So my 30,000 WON (about $30) is fully used in a way that I can’t complain. Because alas, at the end of the day, the comradeship that was built between Matt, Dave and I and the almost violent self-competitive “rivalry” I waged through for the past two months, cannot be measured by bills alone. Blood, sweat and tears went into this… at least sweat and probably messed up cartilage (-_-). 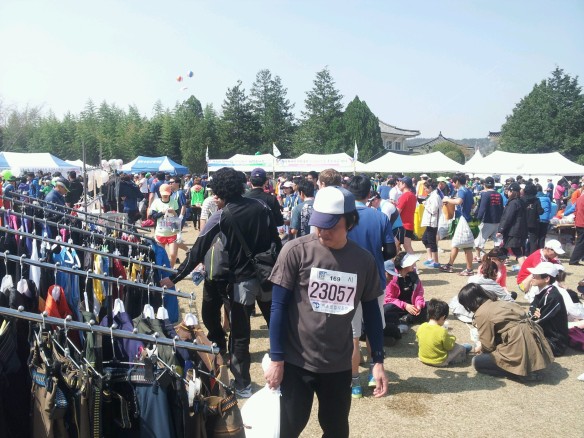 You can shop for your next marathon outfit right here! 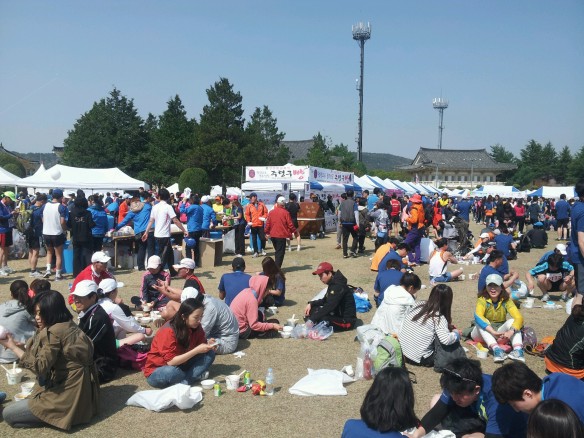 Imma sun bath all day and get my money’s worth!