I wasn’t prepared to mull over my lunch while listening to the unusually loud chatter of my teachers as the news broke out. Finally one teacher translated for me, “Did you hear?! Kim Jong-il died!” And so it began, the great speculation of what will happen next. I myself was surprised how slow it was to read about it all in the English-speaking newspapers and sources, whereas it was quick to be broadcasted in the Korean newspapers. And as I am trying to decipher the quick chatter, the older teacher behind me turns and says, “Alexa! I am afraid ..of war!”

That is always the initial fear isn’t it? But friends, it was worse when a few months ago North Korea bombed Yeonpyeon Island back in November. We had a drill and there was more fear.

What has surprised many and shocked some of my friends is seeing the people mourn  in North Korea. We watched the disturbing video of people sobbing in public places and statues, screaming for Kim jong-il to return to them.

When Kim Jong Il’s father, Kim Il-sung, died in 1994, the party actually conducted surveys to see who displayed the most grief. And those people who stayed dry-eyed and just got on with their jobs as normal and didn’t cry, they were actually punished. So that kind of thing looks like it’s happening again.

So we all wait for what’s next. I know, I know…it must freak all you friends and family back home seeing me here and how I am in all this mess. But it’s not like that. Watch CNN and you think I am ready to evacuate at the drop of a hat. But again, remember that the news exacerbates reality. The US embassy in Seoul has not sent any warning…so for now I think we are just watching for what is next and seeing how history writes itself. I’m ok mom, please don’t worry. We are still upbeat and waiting to celebrate the holidays. It is about miracles anyways right? So for Christmas, I am just praying for peace .. for so many reasons and for so many people.

PS – this is what most foreigners in Korea are fearing: 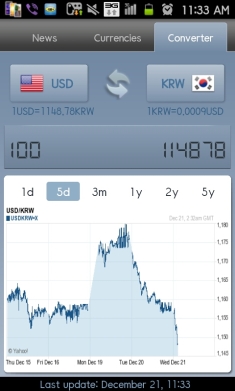